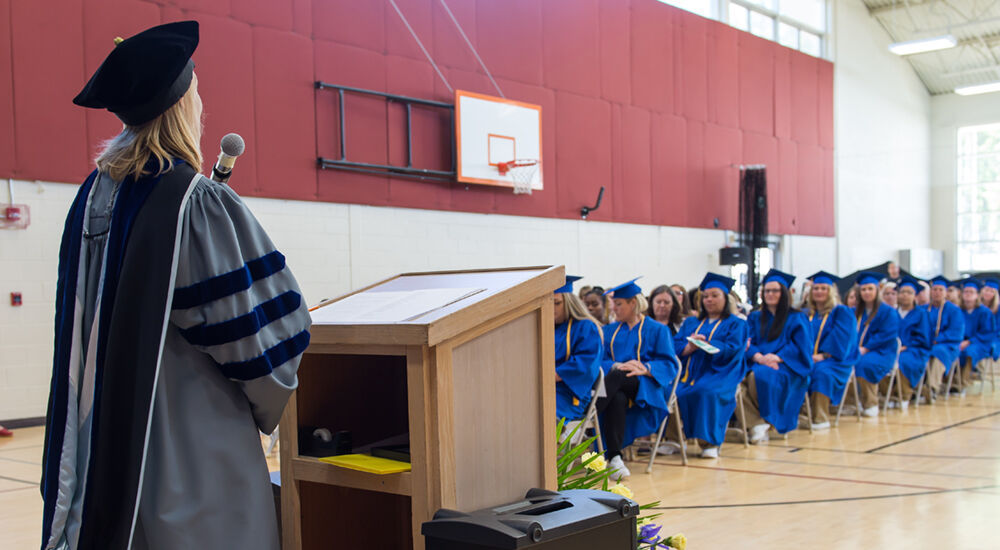 Tanya Erzen delivers the opening speech to graduates of the program. Photos by Anice Bommerscheim and Jeff Hobson 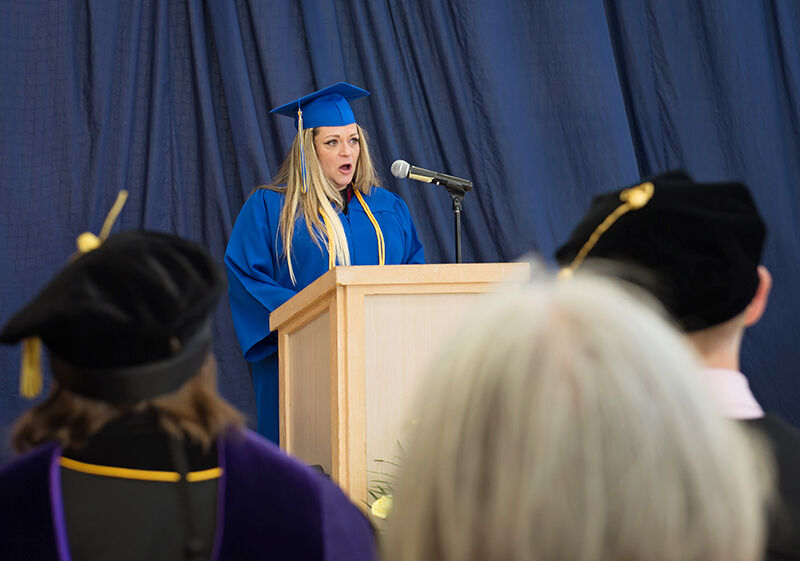 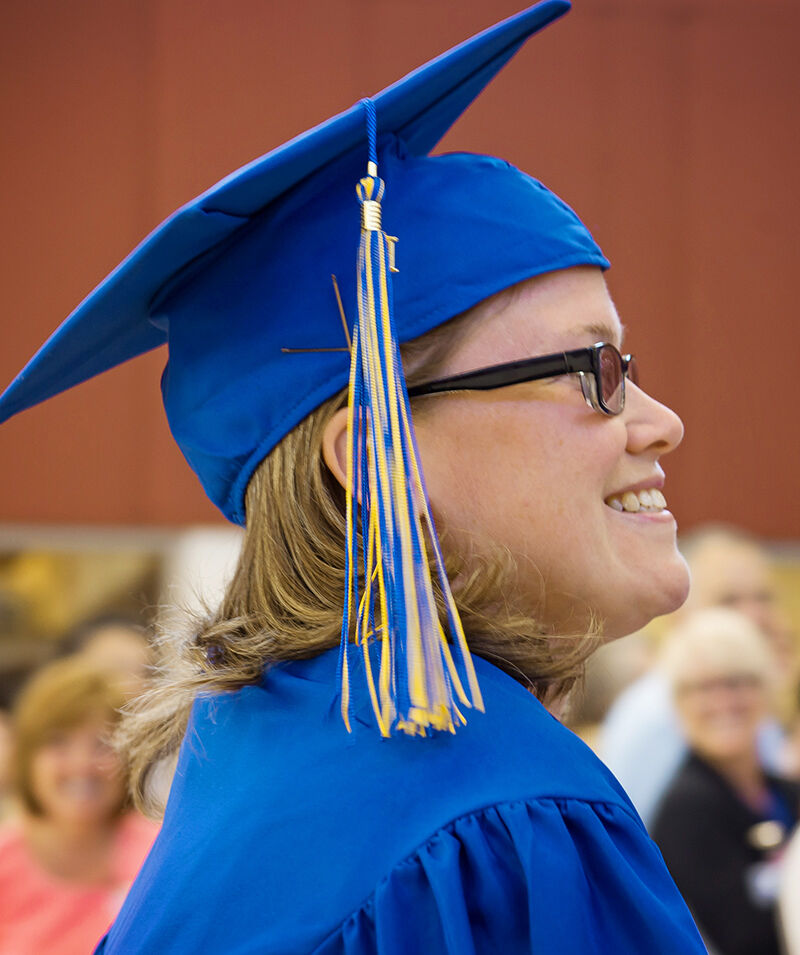 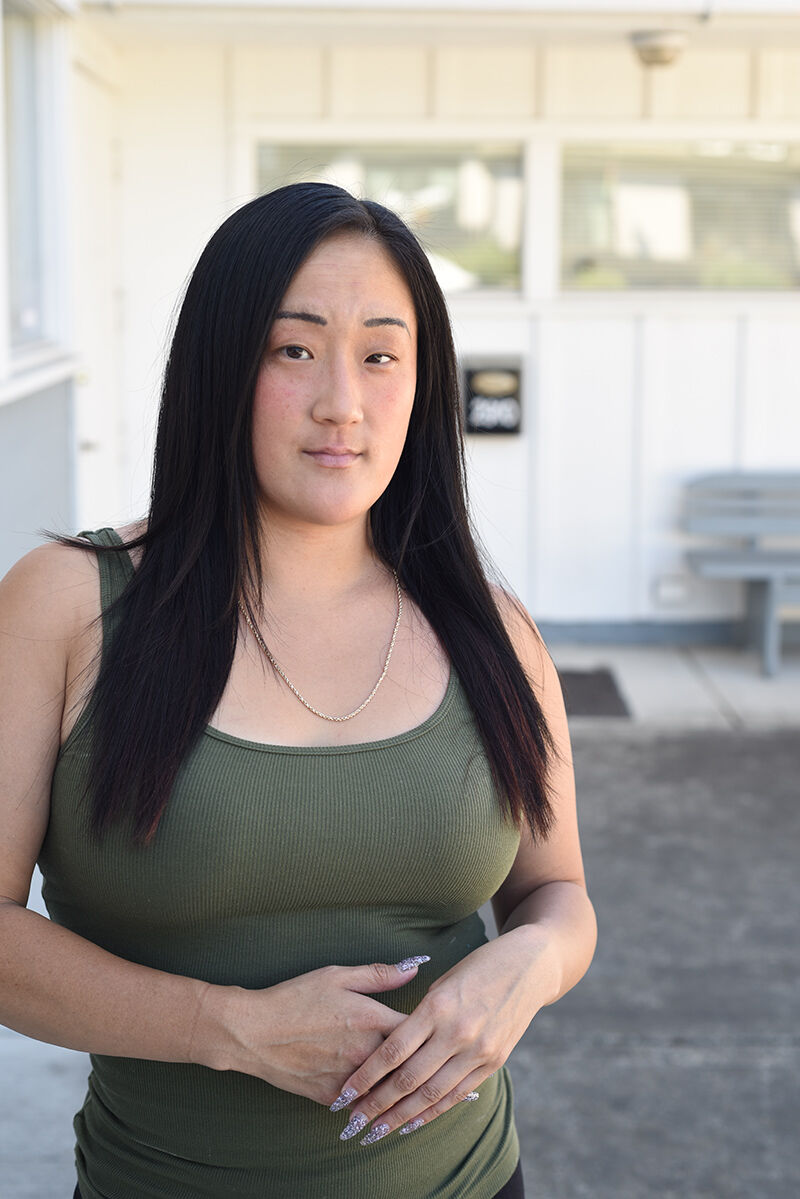 Jannie Lee graduated from the FEPPS program in 2017.

In 2012, the Washington Corrections Center for Women underwent an important shift: College classes became available inside the prison’s walls. Since then, the organization that made this possible — the Freedom Education Project Puget Sound (FEPPS) — has grown into a fully accredited college program that has offered 70 courses to 252 women.

The Washington Corrections Center for Women is intimidating in its size and structure. Located in Gig Harbor, it is the largest women’s prison in Washington, housing more than 700 women of all security levels from across the state. High chain-link fences wound in wide loops of barbed wire on the top and bottom dominate the outer perimeter — which is the extent to which most people ever see the prison.

This backdrop — combined with dramatized representations of prison and prisoners on television — might lead one to draw certain assumptions about the women serving sentences inside. Labeled by society as criminals, incarcerated women are imprisoned both physically and mentally, entangled in their own histories and defined by negative stereotypes. The Freedom Education Project Puget Sound (FEPPS) seeks to help them create brighter futures for themselves by providing women in prison with access to higher education.

The idea that someone can identify as both an inmate and student might seem contradictory. However, due to the creation of FEPPS, plenty of women at WCCW shift between the two roles every day, juggling their jobs, social lives, and full class loads inside an institution that was built for anything but the rigorous pursuit of knowledge.

For those of us who have been students, it may be difficult to imagine the logistics of earning an associate degree — fully accredited by Tacoma Community College — in a place without internet access, technology, or regular access to professors. Despite the logistical nightmare, more than 100 women pursue the challenge quarter after quarter, enrolling themselves voluntarily as full-time students.

FEPPS began offering classes in the prison in January 2012 after women inside requested it as a means of rehabilitation. “In 2009, women in the prison formed an organization called the Women’s Village,” said Tanya Erzen, executive director of FEPPS and professor at the University of Puget Sound in Tacoma. “The prison was the most violent in the state, and people living there with long sentences decided that they needed to build a community-based organization that would help improve their living conditions.”

These women invited Erzen and several other professors — Stuart Smithers and Gilda Sheppard — into the prison to discuss the possibility of having college classes taught to prisoners, which the Women’s Village believed would be a catalyst in changing the violent culture at WCCW.

“We were excited to have a partnership with them,” said Erzen.

Erzen is an experienced educator who had previously taught at a women’s prison in New York, as well as at a wide range of public and private universities; she understands the impact that access to a high-quality and rigorous education can have on a person. This impact, she said, is even more extensive for someone who is incarcerated.

The decision made by Erzen and her colleagues to start the nonprofit organization thus served an acute and practical need, especially considering that Congress eliminated all federal funding for college in prison in 1994. In the last two decades, however, research and data have clearly shown that college in prison empowers women and their children, fosters economic stability, increases the likelihood of further educational pursuits, and reduces rates of recidivism.

With these facts in mind and with the Women’s Village established as partners, Erzen, Smithers, and Sheppard founded FEPPS in 2011. In January 2012, a small group of women was able to begin taking classes, and accreditation began in 2013. Thirty-one-year-old Heather Opel, who graduated with the class of 2018 in June, was among that first small group.

“I wanted to be able to expand my mind and say that my time in prison was productive,” said Opel, explaining why she pursued the college classes even before accreditation had become available.

Incarcerated at age 14, Opel said that the time she spent in class helped her to gain confidence and get past a lot of the self-doubt that she felt before. With her associate degree now in hand, Opel aspires to pursue more education through the prison’s fledgling bachelor’s degree program; when she is released in five years, she hopes to enroll in culinary school.

Most women incarcerated at WCCW have had minimal access to education, come from impoverished backgrounds, and did not finish high school. Renewed access to education in prison, Erzen said, changes women’s lives by shifting the way they perceive themselves and giving them concrete goals to pursue once released. It is not too surprising, then, that on a national level, people who gain education while incarcerated are 43 percent less likely to return to prison than those who do not.

Jannie Lee, who graduated from the program in 2017 and who was released in January, is acutely aware that her education has positively changed her path. Lee, 36, was incarcerated for almost seven years, and she pursued something educationally related the entire time she was in prison. “I never went to school before I went to prison,” Lee said. “FEPPS was my first college experience.”

Lee described her experience as a college student in prison as both inspiring and difficult. “The environment in FEPPS was driven and focused on our education,” she said. But even the support provided by the program’s professors cannot remove the structural and logistical barriers that exist inside of a prison’s walls.

“I used to have to sneak into the bathroom late at night to try to do homework (with other students) because one of us didn’t know how to do it,” Lee said. “Since we weren’t in the same hallway, the bathroom was the meeting space for help.”

Despite these hurdles, Lee craved the classroom space: It was the one place she could go where she felt she was treated as a person instead of a criminal. The professors don’t hold judgments against their students, she said, and the classroom environment — which feels special in part because class is run without correctional officers in the room — is such that the women can step outside themselves for an hour to be students instead of prisoners.

Even the physical rooms in the education building feel like they belong to a school rather than to a prison: There are lines of tables facing a front chalkboard, full bookshelves, big windows. Every time a woman takes a seat at one of these tables, pencil and notebook in hand, she takes a step toward becoming a more confident, critical, and empathetic person — and she has a strong support network to get her there.

“It helped me to be around people who genuinely cared and who saw better in me, or saw that I was trying to be better,” Lee said. “Prison is not anything like what you see on TV. It’s obviously not great, but I do think that the environment is what you make it. If you surround yourself with people who are supportive and encouraging, then you’re going to be supported and encouraged as you try to change.”

Now that she has been released, Lee has remained determined to continue her higher education. This fall, she starts as a student at University of Washington Tacoma, where she plans to pursue a bachelor’s degree in business.

“If I didn’t have school as an outlet, I don’t know what I would be doing now,” Lee said. “Being in FEPPS allowed me to become the person I wanted to be. It helped me find a lot of self-confidence that I didn’t know I was able to have before I was in the program. Coming out of prison with that confident mindset was important, because being a felon is hard — you get told ‘no’ a lot. But I’m OK with who I am now, which makes hearing that ‘no’ over and over again (feel) OK. (The program) helped me in every way.”

The same sentiment of gratitude, purpose, and confidence was echoed repeatedly at the commencement ceremony for the class of 2018 — the third class to graduate from the program — held in June. Donned in full graduation regalia, 12 women waited to receive their diplomas in the prison’s gymnasium. Each graduate had a row of chairs to herself, reserved for friends and family.

The ceremony was complete with a keynote speaker and speeches from three of the graduates. In her valedictorian address to the packed audience — many of whom were incarcerated women who have either graduated or hope to graduate soon — Donna Akers focused on the incredible feat accomplished by herself and her classmates.

“At some point, WCCW went from a prison to a university,” Akers said. “In the classroom, you all railed against stereotypes of who you are and who others perceive you to be. Stereotypes are always incomplete: We are so much more than a single story, more than convicts. We are not defined by or limited to being those people.”

After 14 years of incarceration, Akers was released in May and returned to the prison to graduate. Her speech was eloquent, moving, and strong — what one might expect from a valedictorian from any institution. Yet that power was partly derived from her knowledge of what prison had been like before she had access to an education. She admitted from the podium that she had been a “problematic inmate” during the first 11 years she was incarcerated, and that it was only in the last three years — which coincided with her enrollment in the FEPPS program — that she stopped accumulating infractions and being sent to segregation.

Now, Akers is enrolled as a student at the University of Washington and is pursuing a degree in law, societies, and justice. Once she has attained that, she plans to attend law school.

The FEPPS program at WCCW has given countless women the opportunity to rewrite their stories, to step out of their stereotypes, and to find a sense of freedom in knowledge — even if they never physically leave the prison. It allows them to assume a label that is positive.

“These women are called many things during their time in prison,” said Erzen in her welcoming remarks at the graduation ceremony. “They are called inmate, prisoner, by their last name, by their DOC number. But today, the women here are one thing only. They are college graduates.”

80-120students make progress toward a degree

The United States’ prison population is the largest in the world, with more than 2.2 million inmates.

Women are the fastest growing segment of the prison population, and women of color are represented at a disproportionately higher rate.

Prisoners who go to school while incarcerated are 43 percent less likely to return to prison than those who do not.

WCCW sidebar: fepps.org. National sidebar: Davis, Lois M., et al. “How Effective Is Correctional Education, and Where Do We Go from Here?” RAND Corporation, 2014, Report No. 564.