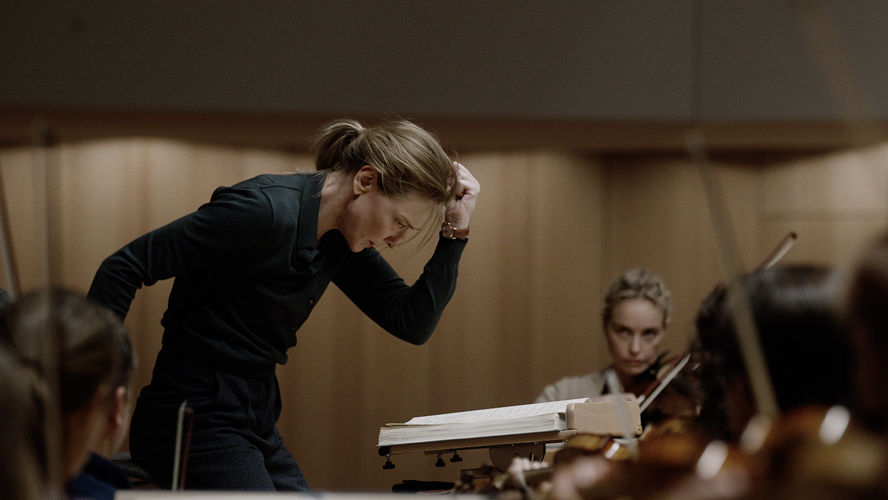 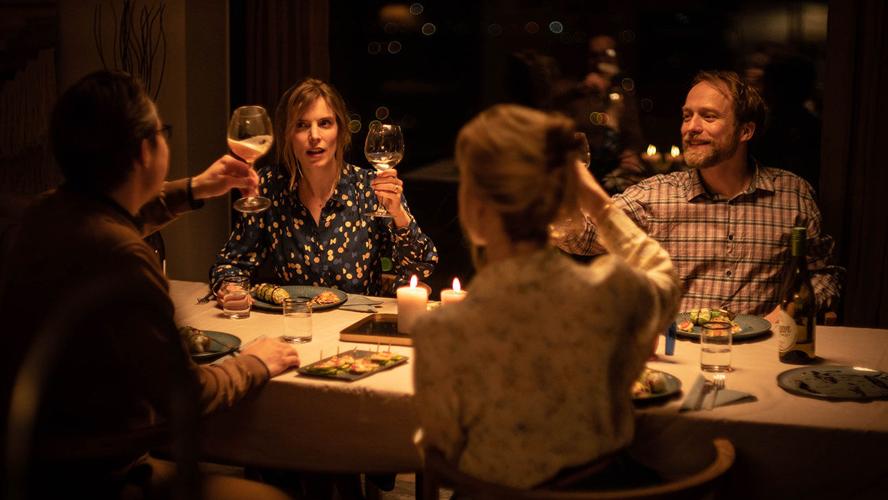 We meet the icon before the person. Lydia Tár (Cate Blanchett), the title character of Todd Field’s first new movie in 16 years, is seated across from the writer Adam Gopnik (playing himself) for a live conversation at this year’s The New Yorker Festival. Before the conductor can utter a word, Gopnik runs through a list of accomplishments so vast and impressive — the eye-popping highlight of the bunch is that the Leonard Bernstein-mentored Tár is a rare EGOT winner — that when he hails his subject as one of the “most important musical figures of our era,” it sounds less like gracious hyperbole than a simple statement of fact. This is a lot for an actor to convincingly live up to. But when you have someone like Blanchett, whose own achievements put her in a similarly imposing league as the woman she’s playing, it’s not so hard to be deluded into thinking she’s the real deal. The ensuing conversation with Gopnik, which shows off Tár’s dazzling intellectual and oratorical gifts, only enhances this mirage of creative genius.

To say Tár, who has a book coming out and is about to embark on one of her most audacious musical projects yet, is at the top of the mountain feels like an understatement. It’s like she sprouted wings once she got to the summit and kept soaring higher. But in Tár, those wings will be clipped, and the hand holding the scissors will have been her own. Field doesn’t come right out and say as much, though. Tár is a tragedy that sneaks up on you. Field first moves within the contours of Tár’s life, with the scenes succeeding the New Yorker interview exploring the different angles of her public persona — a friendly encounter with a moon-eyed fan at a coffee shop; at Juilliard, lecturing; at a business meeting — and where she ostensibly is being most genuine, which is when this self-described “U-Haul lesbian” is at home with her wife, Sharon (a fantastic Nina Hoss), who also happens to be the Philharmonic’s first violinist, and their adopted daughter Petra (Mila Bogojevic) in Berlin.

Field shoots most of the movie in medium and wide shots, reserving close-ups for when Tár really means something she’s saying or experiencing. It evokes how seldom, at this point in her career, Tár fully offers herself in the moment and not just a fresh-angled view of the persona she’s honed. We learn, later in the movie, that she actually grew up lower-middle-class as Linda Tarr, and worked her way up not just through obsessive dedication but an unhesitant willingness to shove anyone standing in her way aside. Her ultimately successful ambitiousness has turned nearly everything in her life transactional. Small things she can’t easily seize control over — the vexing vibrations of a moving car’s dashboard, the twitching leg of someone overcome with anxiety — are now things that practically can make her crazy. Control has become everything.

Tár is a human bulldozer, though we still find her hypnotically charming for much  of the movie — like someone we would want to be around as much as we could if we were in her life and whose approval would give us an automatic boost in confidence. In one case, she admonishes a very-online student at her lecture for refusing to engage with Bach (because he was maybe a misogynist) with such glee that the 20-something leaves in a huff. She seems thrilled to be the victor in this unfairly stacked battle of wits. (The kid hardly can get a word in, and when he does he comes across like a mouse to her knife-beaked bird of prey.) Later, Tár confronts a girl who’s been bullying Petra at school with such steely-eyed iciness that she calls to mind a serpent miraculously given the gift to speak. Suffice it to say, Petra, who calls her mother by her first name, will no longer be coming home with bruises and a haunted look in her eye.

These early scenes of showy intimidation are blackly funny. Then hindsight gives them a new sense of malevolence. They actually, it turns out, were portents gesturing at the darker currents pulsing beneath Tár’s outward magnificence. Rumors that she has historically given professional favors to younger women in her orbit in exchange for sex — only to essentially blacklist them from all orchestral bodies of note if they refuse — are growing. And they seem ready to crest into public confirmation when Tár’s latest blacklistee, a budding conductor named Krista, kills herself, understandably despondent over a sudden shunning from every orchestra that not long ago had seemed within reach. (Tár’s newest target is a Russian cellist named Olga, played by real-life musician Sophie Kauer.) This abuse of power also gives Sharon and Tár’s relationship a new, unsettling layer; the former would be more sympathetic as the “long-suffering wife” type if her silently deadly complicity weren’t so stark.

Field never takes the movie anywhere overly conclusive, nor does he shuttle the narrative into a simplistic, seen-it-before arc with a clear ethical stance. This isn’t really the movie about “cancel culture” (which Tár somewhat alludes to when a misleadingly edited video from our antiheroine’s Juilliard visit surfaces and goes viral) many critics have characterized it as. And it isn’t a definitive take on whether or not art ought to be viewed as separate from the abuser who has created it. (Tár herself tellingly believes the answer is yes.) It’s more so a piercing, complicated study of someone “great” whose addiction to their power — and the general high that comes from conflating universal acclaim and adulation with invincibility — has maybe surpassed their love for the art that got them here. If Tár is really “about” anything, it’s the corrosive side effects of authority and wealth, and how both can warp the morality of a once well-intentioned person in need of another outlet over which they can exert even more satisfying control. Field’s refusal to neatly moralize or fall back on didacticism makes Tár far more rewarding to engage with than a movie practically sweating to escort the audience into obvious interpretations.

Flitting easily between English and German, Blanchett is spectacular in the title role. There’s no attempting to get us to love this monstrous genius; she instead gets us to see the complex, humanly contradictory whole with the kind of vividness movie characters, so often cursed by the restrictive good-bad binary, are rarely afforded. You can’t picture another actress in this part. It towers in a way that would almost certainly squish anyone other than Blanchett, a performer whose can-master-anything conviction in all her performances lends itself nicely to this character that, to the public eye in its alternate version of 2022, is larger than life. It’s obvious Tár thinks of herself that way, too. The film’s ever-spiraling, tragicomic final act reminds her that that’s no way to conduct yourself if you want easy protection from the threats of a self-made downfall. In the best movie of the year so far, Blanchett gives her greatest performance yet.

IN SPEAK NO EVIL, Bjørn and Louise (Morten Burian and Sidsel Siem Koch), a Danish couple vacationing in Tuscany with their daughter (Liva Forsberg), meet Patrick and Karin (Fedja van Huêt and Karina Smulders), another pair on holiday with their young son Abel (Marius Damslev). Their chance meeting springs into what feels like a promising family friendship, and when Bjørn and Louise return home, they consider their time with their short-term companions a highlight of the trip. So when Patrick and Karin send over a postcard a few weeks later, asking Bjørn and Louise if they’d be interested in a weekend trip to their country home in the Netherlands, they figure it would be stupid to say no. Turning down an offer to build on this new friendship — especially amid a middle age that, for Bjørn particularly, is starting to feel almost too depressingly monotonous to bear anymore — seems a bigger mistake than taking too much stock of the truth that, technically, they don’t actually know anything about this couple living in the middle of nowhere.

Bjørn and Louise don’t have to stay at this house long to know that friendship was maybe better left in Tuscany. Patrick tends to be strangely passive aggressive, most frequently around Louise’s vegetarianism. When they go out for dinner, Patrick and Karin hire a babysitter, a grown man, to watch the kids without consulting their guests first. (That dinner proves so awkward that it’s probably a good thing the children stayed home: Patrick and Karin are uncomfortably affectionate the whole time; then Patrick insists on drunk-driving home, his music blaring so loudly in the speakers that the normally mellow Louise is pushed to yell at him in anger — something he ignores.) Social discomforts keep piling, each the kind of thing that’s a certifiable new-friendship dealbreaker. But Bjørn and Louise continue to stay, not wanting to upset their hosts. We sympathize for a while. Then it becomes unbelievable.

But that’s by design in this black comedy turned bone-chilling horror movie from Christian Tafdrup, which functions with brutal effectiveness as a horror story about the perils of ignoring your instincts to preserve the feelings of a stranger. It does feel a little long at a relatively short 98 minutes, if only because Bjørn and Louise’s polite spinelessness can stretch credulity. But the last 15 minutes or so are so impossibly frightening that they’ll be sure to stay with you forever. Horror fans will want to see Speak No Evil once, and then never again.