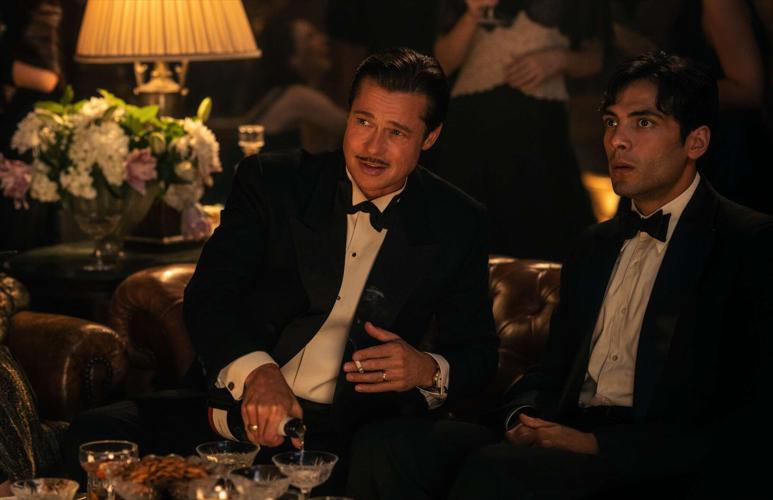 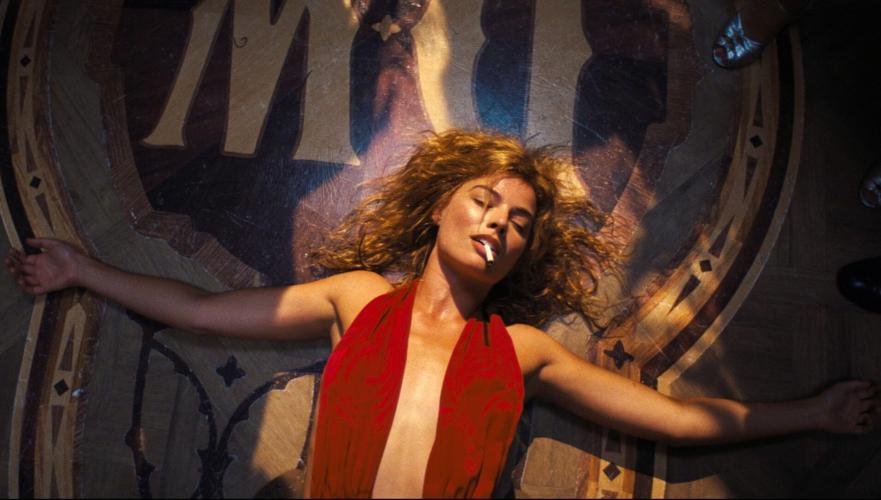 So often the advent of one’s movie stardom hinges on chance. A teenage Lana Turner skipping class for a coke at a Sunset Boulevard malt shop where the publisher of The Hollywood Reporter also happened to be stopped for a snack. A 19-year-old, not-yet-blonde Marilyn Monroe drawing the eye of a photographer snapping pics of the lovely young women manning the aircraft factories temporarily vacated by male employees now off fighting in the war. A 31-year-old Tippi Hedren deciding to take the part in the diet soda TV commercial that would coincidentally get her seen by a looking-for-his-next-Grace-Kelly Alfred Hitchcock.

One of the several principal characters of Babylon, Damien Chazelle’s Hollywood epic spanning from 1926 to 1952, is in the lineage of these actresses, not just because she is beautiful and blonde and a gifted (though constantly underestimated) actress but also because her being recognized en masse as all those things is also contingent on the alchemy of being at the right place at the right time.

Nellie LaRoy (Margot Robbie) almost doesn’t make it into the bacchanalic Bel Air party that opens the movie. She’s a nobody from New Jersey so confident she’s a star-to-be that her not being on the guest list feels more like a pesky gnat than an actual obstacle. After managing to get through the front doors and, through her fevered dancing, announce herself one of the many “life of the party”-style figures of this packed house cinematographer Linus Sandgren captures with the half-thrilling half-scary mania of a Bosch painting, Nellie makes the unwittingly good decision to shimmy her hips atop a table putting her directly in the line of sight of a movie producer. He’s desperately looking for a last-minute replacement for the suddenly unavailable female lead in his movie set to start shooting tomorrow. Maybe Nellie would be perfect.

Nellie ascends rapidly. Captivated audiences take to this tough-talking “wild child”; filmmakers appreciate her quicksilver digestion of their direction and her freakish ability to cry on cue so precisely that she can control how many tears pop out of a certain eye and when. But that party trick-turned-asset on a movie set proves the only thing the Clara Bow-esque Nellie can maintain real control over in Babylon, a movie where she eventually will be ruined by her own insatiable appetites for self-destruction and the unintentionally cruel vagaries of public favor that no one in her industry is safe from.

Nellie is a natural for the silent-movie era in which she breaks out. But as much as she was in the right place at the right time for that one producer’s stressed-out eyes, she inadvertently picked the wrong moment to really relish in her stardom. About a year out from the release of her first movie comes The Jazz Singer, the first “talkie.” That Al Jolson vehicle, film-history texts would be remiss not to remind us, was an exciting boon for creative possibility. But it also was a death sentence. That wasn't just true for the many actors and directors and additional technicians building their names on the silents, but also the economic way of working that allowed silent films to be made rapidly and for the most part on the cheap, what without dialogue to be memorized or the logistical considerations to be made for sound, among other things.

Profuse with action-heavy long takes and rapid-clip dialogue, the pre-talkie stretch of Babylon intoxicatingly — if exaggeratedly and not always accurately — evokes the sugar-rush quality of silent moviemaking and the behind-the-scenes dramas surrounding them. Post-The Jazz Singer, though, the crazy grin the movie inherently seems to be wearing gradually moves downward. The fallout of the career-ruining transition grows less and less ripe for grim comedy (the impossibility of getting a single good take on Nellie’s first sound picture may be Babylon’s funniest sequence) and more tragedy. The movie turns into a sometimes-even-creepy dark inverse to the end-of-the-silent-era musical satire Singin’ in the Rain (1952) (which Chazelle references more than a handful of times) built on a series of what feels like episodes. Initially they harp on the joys and absurdities the movie industry can inspire. Then they wise up and home more in on the black-hearted ruthlessness endemic to it.

NELLIE BECOMES A TOTEM of the soul-crushing experience of having the public as quickly lift you up as decide that you’re repulsive. She’s joined by Jack Conrad (Brad Pitt), a John Gilbert stand-in. He’s at the height of his powers when we first meet him but is later publicly discarded when his average Joe voice prompts belly laughs from audiences expecting more regal tones from this fixture of the period drama when he makes his sound debut.

In what partly feels like a response to the fair critiques that his other Hollywood movie, the more straightforwardly love letterish La La Land (2016), was myopically white, Chazelle also spends much time in Babylon charting some of the setbacks faced by those with identities eventually reconfigured as liabilities. Modeled after pioneering directors like Dorothy Arzner, Ruth Adler (Olivia Hamilton) is the rare woman to triumph in the boys’ club of Hollywood filmmaking. But her expiration date is implied to dovetail with just one film not performing as well as her other projects. Lady Fay Zhu (a tremendous Li Jun Li), a kind of composite of Marlene Dietrich and Anna May Wong, is celebrated in the silent era as a cool symbol of lesbian sensuality; her introduction in Babylon has her doing a slinky torch song singing the praises of her lady lover’s assets. But in the talkies, which also ushers in aggressive moralism both by audiences and the powers that be, she practically is banished for her openness around her sexuality, compounded by the fact that she is not white. (She’s the one paying the price for a romance she has with Nellie the film unfortunately relegates to an unexplored aside.) Trumpet player Sidney Palmer (Jovan Adepo), who is Black, succeeds as a studio musician. But he’s suffocated by the white liberal condescension from those more powerful and an expectation he panders to their tastes, reaching a stomach-churning breaking point when he’s asked to shade his skin with burnt cork so that he and his backing band — whose members have darker skin than he does — do not rile the protestations of Southern audiences decrying entertainment by a “mixed race” group.

It’s suggested Fay Zhu is able to pivot and find work — albeit work that, as it went with Wong, was not granted the budgets or esteem of the movies she built her name on — whereas Sidney is moved to quit the industry altogether. Manny (Diego Calva), a young Mexican immigrant who starts the film working odd jobs around the industry in hopes of one day getting somewhere bigger, has a comparatively upward trajectory, managing to get an executive position after years of thankless gruntwork. But that requires bite-the-bullet assimilation he proves more than willing to practice, with him altering his backstory (he goes from presenting as Mexican to Spanish) and being mostly responsible for Fay Zhu’s and Sidney’s fates. It’s all worth it to him as long as it means scaling to higher rungs of the professional ladder.

The Hollywood Golden Age continues conjuring the kind of magic missing from the movies following its agreed-on end. But as any movie fan unimpervious to its powers does, Chazelle knows that that magic is also girded by wide-reaching tragedy, the white-supremacist, patriarchal, and heterosexual conventions perpetuated by it at best making a tiny bit of room for those not embodying those traits (though only with fussed-over approval and frequently questionable framing) and at worst alienating them altogether, making the mourning of all the creatively fertile lives and careers that could have been but never were an insidious given.

A powerful gossip columnist (the always-welcome Jean Smart) assures the feeling-bad-for-himself Jack late in the movie that his sudden descent can’t be very easily explained but that what he did well will at least renew a certain kind of immortality in the eyes of future generations rediscovering his work. But of course the former is true only for some and not many others, whose elbowings-out can be almost immediately pinpointed. And the latter is a fraught, bittersweet silver lining, most obviously because only about 25 percent of silent films can still be publicly viewed.

The life-and-death fullness of the more-than-three-hour Babylon underscores that fundamentally the experiences of its characters continue evolving and mutating in some shape or form with time rather than becoming regrettable artifacts. The movie industry, as it’s designed, is doomed to eternally be at once a dependable font of joy and profound evil. Chazelle’s attentiveness to what he wants Babylon to be “about,” what he wants it to chew on, comes at the cost of very rich characterization. Its cast is an assembly of entertaining, too-neatly-drawn ciphers headed by the at moments never-better Robbie; it wouldn’t be wrong to find the depiction of silent-era excess a bit insultingly universalized. There’s little, too, of what feels like a genuine appreciation of the art of silent moviemaking. (Finished products are practically never seen; the work of it all, not the creativity, is accentuated.) But I still got caught up in the rush of this vision epitomizing, sometimes brilliantly and sometimes I think forgivably rudimentarily, the idea that a true love for something is not in fact true when blind eyes meet its flaws.